There are a number of different types of energy used in medicine including lasers, microwaves, radio-frequency (RF) current, ultrasound (US), magnetic resonance (MR). Some combine modalities such as RF current with plasma, argon gas, or carbon dioxide. All are designed to achieve the desired clinical effect of cutting, cauterize, or vaporizing tissue with minimal disruption to surrounding tissues. They must also ensure the safety of patients and their caregivers.

The analysis performed here will focus on surgical energy products used for general surgery. Older instruments include forceps, pencils, and needles attached to electro-surgical generators for open surgical procedures. The newer devices, often described as “advanced,” have been designed to work through ports in laparoscopic surgeries or for specific anatomic areas, such as the spine. Some devices can detect the type of tissue being treated and adjust power accordingly; others have embedded illumination to allow visualization during minimally invasive procedures, or vacuum suction to remove smoke.

All of these devices require an energy source (Electrosurgery generator or ESU), and an instrument to transfer the energy to the patient. The major types include radio frequency (RF), which is basically modified electrical current and ultrasound, which converts electrical current into mechanical motion. More specialized technologies include those that use argon gas, plasma, or a combination of technologies.

RF technology includes both bipolar and monopolar electro- surgery. Monopolar electrosurgery, the most common type of surgical energy, is considered more versatile but has greater risk because of its higher power. It also requires a return electrode, basically a pad under the patient. Bipolar electrosurgery uses lower voltages, so it has limited ability to cut and coagulate large bleeding areas. Ultrasound has the advantage of lower thermal damage to surrounding tissues, but often lacks sufficient power for coagulation. Some of the other technologies, including plasma, allow electrosurgical intervention without actually touching the tissue.

Safety issues of concern are fire and thermal damage to surrounding tissues; for the operating room staff, it is the generation of a surgical plume (smoke) when tissue is cauterized or vaporized. The inhalation of this smoke can be as damaging to lungs as smoking multiple packs of cigarettes.

A fire in the operating room can occur when the surgical energy device ignites flammable material in the operating room field. Thermal damage to the patient during the procedure can occur when adjacent tissues are inadvertently touched by one of the instruments delivering the energy. Alternative technologies, such as ultrasound and bipolar instruments have reduced fire and thermal damage risks.

To reduce the risk to the OR staff of inhaling too much surgical plume from tissue vaporization, some of the hand-held devices have built-in smoke evacuation units to remove the smoke from the operating field. There are also separate devices that are dedicated smoke removal devices.

All operating rooms will maintain at least one electrosurgical energy system. With open surgical procedures, in which the abdomen is exposed, there are literally hundreds of companies that provide basic handheld electrosurgical instruments, including Aesculap, Symmetry Surgical, Applied Medical Resources, Kirwan Surgical Instruments, among others. Also many companies are involved in the resale and distribution of these devices, providing a large source of potential sellers.

The so-called “advanced” surgical energy products are dominated by Covidien (Medtronic), Ethicon (Johnson & Johnson), and Gyrus (Olympus) which provide devices that are designed to operate in a constrained space in laparoscopic or minimally invasive surgical procedures. These products provide basically the same functions as their earlier counterparts at a significantly higher cost. Some manufacturers have developed products specifically for specific markets in ENT, urology, neurosurgery and spine surgery. For example, the highest selling hand-held electrosurgical sealer in the Curvo database is Medtronic’s Aquamantys, which is specifically marketed for neurosurgery, spine, and other orthopedic procedures.

Given the high costs of these devices, a “grey market” is available on the web, with sales on Ebay, among others, of new devices and deeply discounted slightly obsolete devices. In addition, a large number of suppliers will refurbish devices for resale at a lower price. 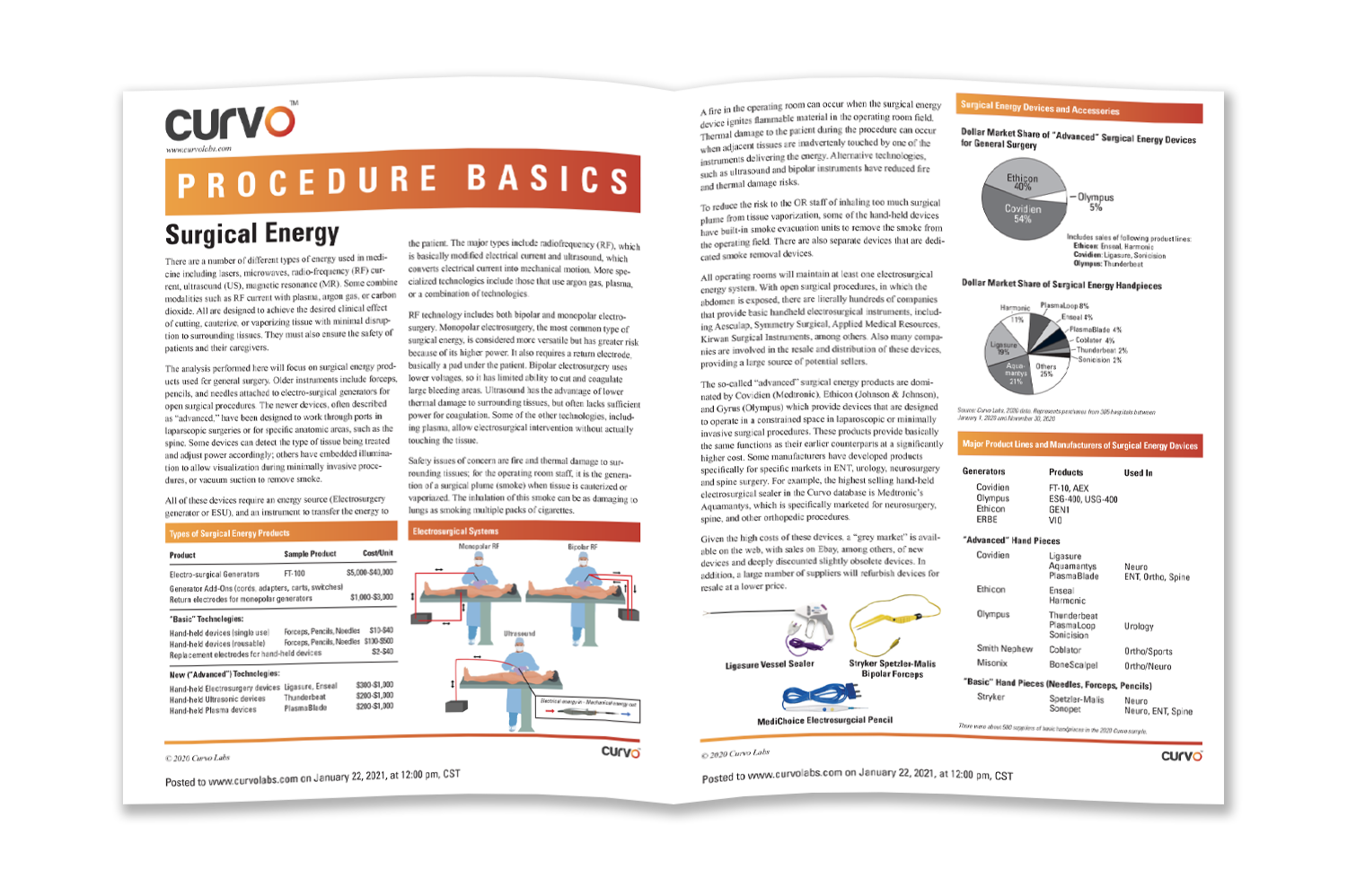