Why People Break Their Bones

The following article was published in Orthopedic Network News (ONN), Trauma Update, Volume 28, Number 2, April 2017.  To sign up for all ONN editions in print and online, plus all archives, click here:  ONN Subscription

The most frequent fractures hospitalized in US hospitals in 2014 were for those of the hip, according to data summarized by Orthopedic Network News from the HCUP (Healthcare Cost and Utilization Project of the Agency for Healthcare Research and Quality (AHRQ)). Hip fractures were the most commonly hospitalized fracture in US hospitals for every year since 1996 except for 2010, when fractures of the upper extremities were more prevalent. According to the AHRQ sample, the number of hospitalized fractures increased 2.7% between 2013 and 2014 to 1.90 million, the number of internal fixation procedures was about 572,000 (down 0.1% from 2013), and there were about 38,000 hospitalized external fixation procedures in 2014 (up 5.6% from 2013).

The Nationwide Inpatient Sample (NIS) is available through www.hcupnet.ahrq.gov. The data includes complete all-payer inpatient datasets from over 5,000 hospitals in 44 states in the US with a sample size of over 8,000,000 discharge records. Direct queries of this data can be made from the AHRQ web site or the entire dataset may be purchased from them. It should be stated that AHRQ uses a sampling methodology in order to determine the number of cases in each group.

The glaring omission in this report is the absence of any outpatient data for trauma treatment. The number of patients hospitalized for trauma is limited to fractures of the large bones and elderly. The majority of fractures of small bones are treated in emergency departments, ambulatory surgery centers, urgent care centers, physician offices, or at home. According to the data compiled for the 2014 year, hip fractures accounted for 18.1% of hospitalized fractures. Following those were fractures of the upper extremities, spine and neck, ribs, face, pelvis, tibia/fibula, ankle, skull, femoral shaft, foot and heel. The rank in the number of hospitalized fractures is the same that was reported in last year’s newsletter. 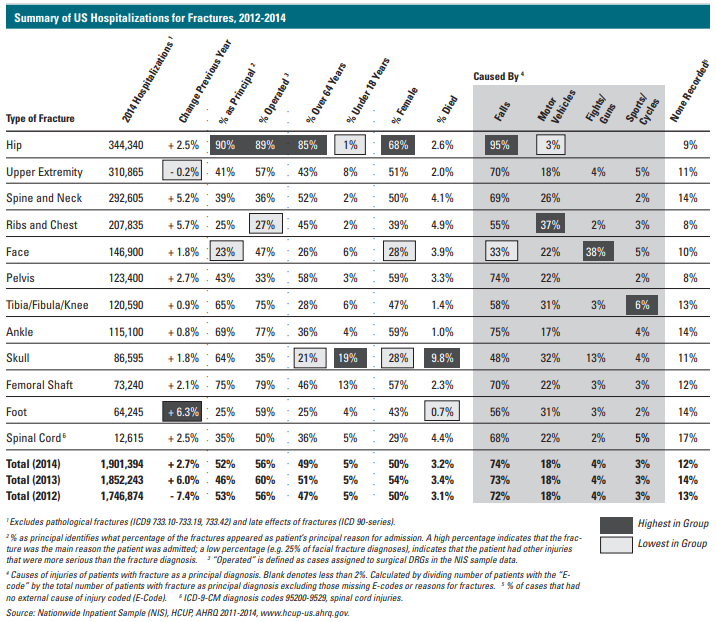 All categories of fractures increased between 2013 and 2014 except for those of the upper extremity. The largest increase was reported for foot/heel fractures, up 6.3%, and the smallest positive increase was for fractures of the ankle which increased 0.8%.

When examining key factors of each bone fracture such as age, gender, treatment protocols, and method of injury, there has been great deal of consistency between the summary reported for last several years.

Pathological fractures take place when a patient’s bone spontaneously breaks without any external cause of injury. This could occur in a severely osteoporotic patient or a patient with a bone tumor. The most frequently occurring pathological fractures reported in the 2014 NIS were vertebral fractures, with over 112,000 reported for the year ending in 2014, followed by those of the femoral neck.

Avascular necrosis (AVN) of the femur is a condition in which the femur has “died” and has no blood vessels providing nourishment to the femoral head. It can be brought on by a variety of external causes, including chemo or radiation therapy, or steroid use. It is painful, often requiring the replacement of joints, including hips, knees, and shoulders. It is not unusual to see a patient who has had 4 or more joints replaced due to avascular necrosis. AVN, if left untreated, may lead to a pathological fracture. The 2014 NIS reported an increase of 1% in the number of AVN diagnoses between 2013 and 2014 to 53,270.

In contrast to the traumatic fractures, 34% of the patients with pathological femoral neck fractures were treated with a total or partial hip in 2014, and 39% were treated with internal fixation devices. Of the patients with a principal diagnosis of avascular necrosis of the femoral neck, 87% received either a total or partial hip or a resurfacing procedure, and 13% received other procedures. Femoral resurfacing may be more prevalent than reported because of inconsistencies in coding these procedures.