The left atrial appendage (LAA) is a normal part of cardiac anatomy. In most people, this small projection off the left atrium causes no issues and is a part of proper cardiac function. It may work as a decompression chamber whenever there are periods of high pressure in the left atrium during regular cardiac function. Unfortunately due to its anatomy, it presents problems for people who are in atrial fibrillation (AF).

AF currently effects approximately 1% of the general population, however studies show its prevalence is expected to more than double in the next 15 years. In people with AF, the LAA tends to accumulate blood clots (thrombi). When these thrombi are worked loose into the vascular system, they may cause strokes. Patients with AF are 5 to 7 times more likely to experience a stroke than the general population. Of patients with AF, if they have an LAA thrombus, they have 3 times the increased stroke risk of AF patients without an LAA thrombus, regardless of treatment with blood thinners. Imaging evaluation is imperative in patients presenting with AF prior to most treatments including LAAC.

According to a 2019 Energias Market Research release, the LAA closure market is estimated to reach $958 million by 2025. This makes it the second fastest growing medical device market and one that supply chain executives will need to monitor as not only the number of devices available for use, but also in the number of patients using the devices is expected to grow over the next 5 years.

There are 2 options for closing the LAA for patients with non-valvular atrial fibrillation: occlusion and exclusion. Occlusion is obtained by placing a device into the LAA which prevents thrombi from escaping and slowly closes the LAA over time. Exclusion is obtained by using a ligature, clip or surgical removal to close or exclude the LAA. Occlusion is typically done through endovascular access, while exclusion is typically accomplished via a thoracoscopic approach.

There are 2 devices currently approved for occlusion: Boston Scientific’s Watchman Device and Abbott’s Amulet Device. Both operate in the same basic fashion. The occlusion device is inserted into the chamber percutaneously in an EP lab. The device then spans the opening of the LAA and keeps thrombi from escaping while the body slowly closes the LAA using the scaffolding of the closure device.

For exclusion, there are limited options as well. The AtriClip from AtriCure is used to clip and seal the LAA. This is done using thoracoscopy and involves cutting and possible cardiac ablation. Append Medical is seeking FDA clearance for their exclusion device, which leaves a suture at the closure site, but no metal. 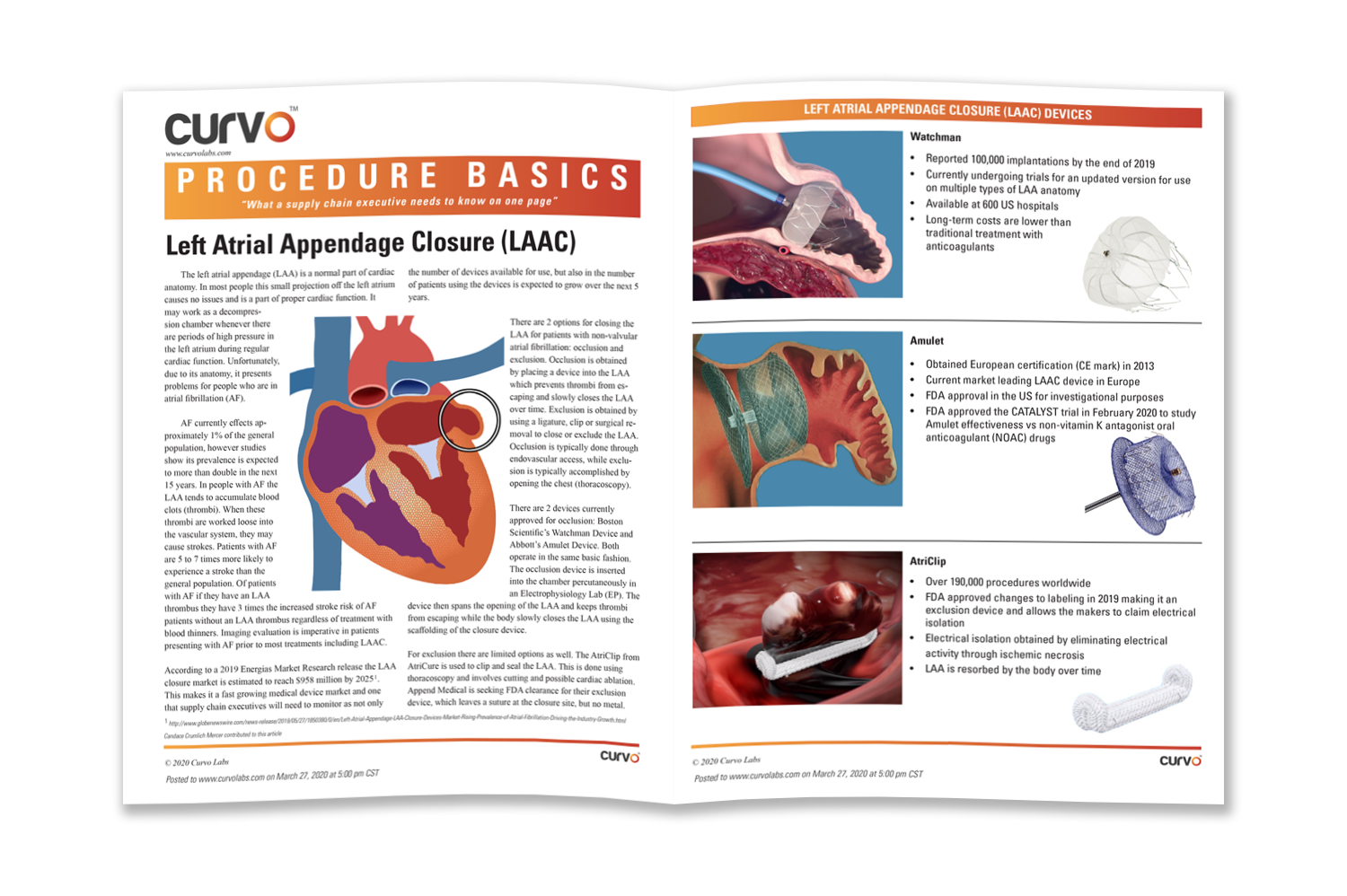