Electrophysiology (EP) studies and ablations are a mainstay of hospital’s EP lab, and the source of much inpatient revenue. The purpose of an EP procedure is to “map” the electrical system of the heart and, if possible, to correct anomalies in the heart’s electrical system. The physiology of the heart contains electrical pathways that generate signals to the chambers to the heart to pump on a precise basis. Occasionally, the circuitry is compromised or damaged which causes the heart to beat irregularly.

A common approach to fixing the circuitry is to “ablate” or zap the offending node causing the irregularity. Biosense Webster and Abbott St. Jude employ an electrical adjustment through an ablation catheter (RF ablation) while Medtronic uses cryoablation to accomplish the same function.

Dexur estimates that there were 35,000 cases assigned to MS-DRG 274, the payment category for inpatient intracardiac procedures which includes ablations as well as mappings. Hospital outpatient payment and inpatient payments were about the same, $21,000, while the physician payment for a complete ablation with mapping studies was about $1,100. There are an estimated 800 facilities that perform some types of EP studies in US hospitals.

In order to complete this procedure, a number of catheters are threaded into a vein from the groin to the heart, each with different purposes: the ultrasound catheter (ICE or intracardiac echocardiography) provides visualization of the heart structures during the procedure. Ultrasound has allowed ablation procedures to avoid using X-Rays or flouroscopy, thus reducing radiation exposure to the patient and the physicians.

Other catheters include those which can both provide general location information, and mapping catheters which create a 3D image of the inside of the heart. Other supplies for the procedure include transseptal needles, used to cross from the right atrium to the left, sheaths used to guide the catheters through a vein from the patient’s groin to the heart, IV solutions and tubing which are used to keep the ablation catheter cool.

While the technology of these devices is impressive, the cost of a single procedure can be daunting. The ablation catheter, the most integral part of the procedure, can cost more than a hip or knee implant, at $3,000 to $4,000. Ultrasound catheters are about $2,000, and mapping catheters average about $2,000. The average disposable costs during an ablation procedure can be well over $10,000, while the hospital reimbursement is about $21,000. In other words, about half of the hospital payment is for the supplies and equipment used in the procedure.

Cost DriversWhile each procedure has to be tailored to the individual patient, and the possibility of unexpected events makes estimating time and duration difficult, a couple of metrics may be used to identify areas to improve operational efficiency such as: 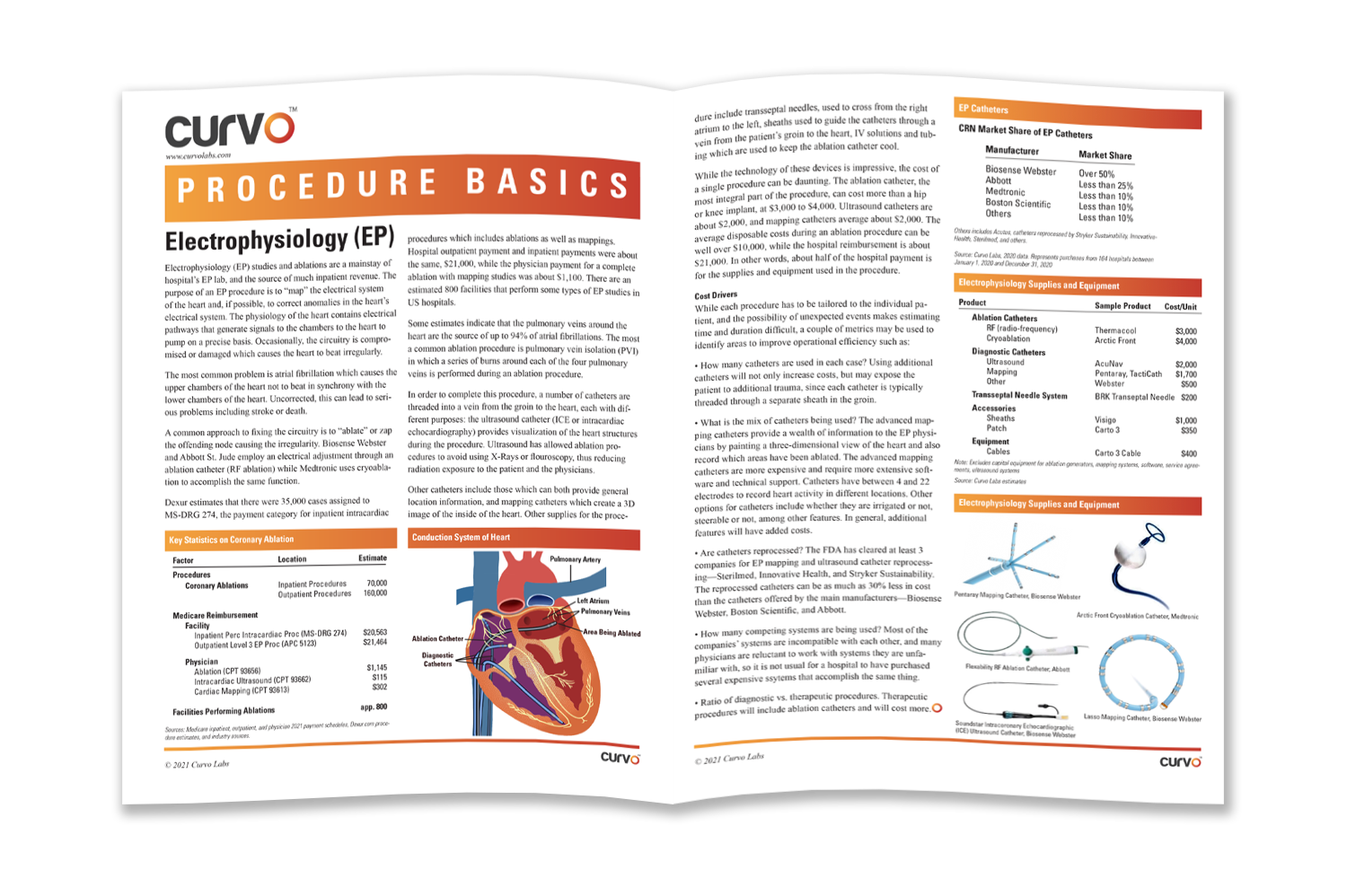